IMS now enables you to design irrigation schedules based on mm application depth. 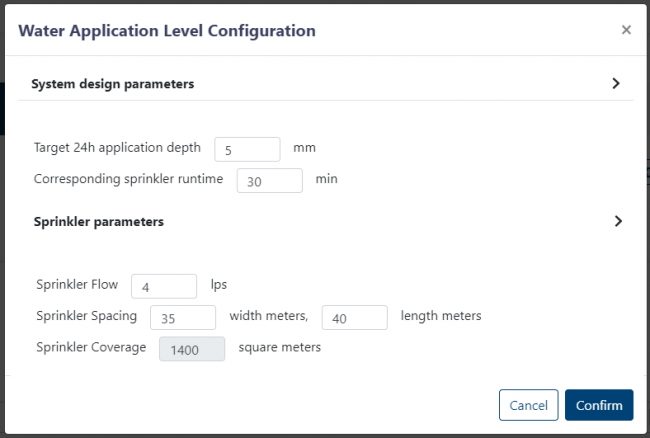 A key feature of IMS is the configuration of Groups of Irrigation Point Controllers (IPC). Groups are created to represent hydraulic line arrangements or sublaterals wherein the irrigation system pump design is based on operating one or more IPCs in a group adjusted for head loss etc to provide predictable flow rates at the sprinkler.

The IMS scheduler uses nominal design flow rates specified in litres per second for each group, to calculate the valve operating time for each sprinkler in the group.

The water application depth is specified in millimetres (mm) based on the average area covered by each sprinkler, consistent with commonly used post spacings and sprinkler selections. Multiple test combinations gave us an average area of about 1400 square metres per sprinkler – this is the default area used in schedule calculations.

IMS allows designers to change the area (or the flow rate) to suit the specific requirements of the site. The area covered the Group is then calculated from the number of IPCs in the group.

Other factors accounted for in the IMS schedule designer include:
• Include days in the schedule when watering will not occur
• Prevent watering at certain times of the day
• Force watering to occur only at certain times.
• Compensate for windy locations by shifting the schedules so sprinklers water at different times on consecutive days.
• Filling unallocated times so that watering is continuous over a 24 hour period.

We have retained the ability to design schedules based on operating time and also the ability to create highly customised schedules if needed. This is important for Farmers seeking application uniformity in blocks that have undulating terrain etc.

Further details of the configuration and use of solid set scheduling in mm is on page 16 of the updated IMS User Manual.

Specifying schedules by water application depth (instead of time) simplifies calculations for farmers who also obtain recommended application depth data from other measurement systems such as soil moisture meters. It also is more consistent with industry terminology used in irrigation systems.