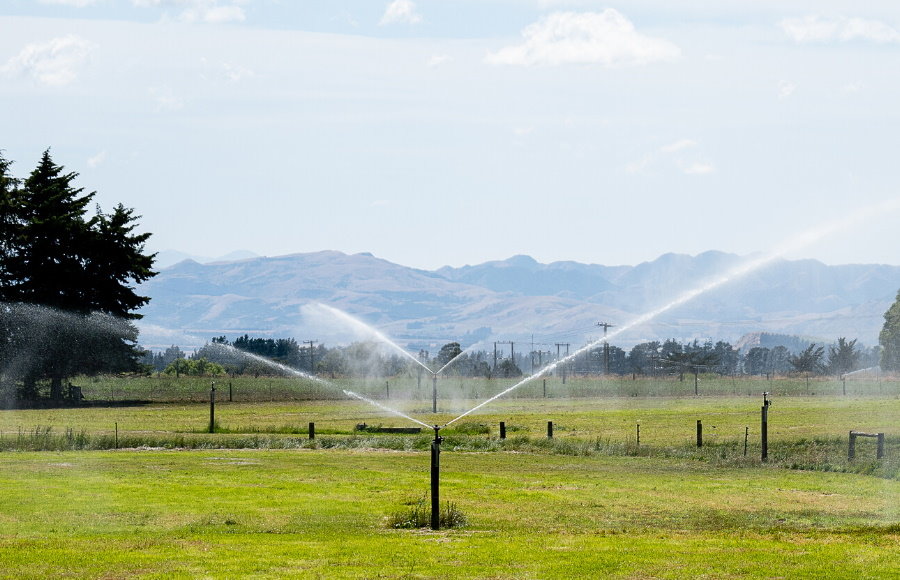 Preventing nitrogen loss: Centre pivots and solid set sprinkler systems were found to be the most suitable irrigation methods to reduce nitrogen leaching

Significant reductions to nitrogen (N) leaching can be achieved by changing irrigation management practices, and new research has demonstrated just how big those benefits can be

A desktop study led by Dr John Bright, Director Research and Development at Aqualinc Research Ltd, and funded by the Fertiliser Association of New Zealand, has shown that it is possible to achieve an average of 27% reduction in N loss.

The research examined data from 12 case study dairy farms in Canterbury. Using computer models, including Overseer, the researchers were able to investigate the effects of different irrigation management rules on pasture production and nitrogen leaching.

Dr Bright says researchers experimented with a different approach than the current practice of irrigating if the soil moisture content drops below 50% of its plant available water. “We looked at lower irrigation trigger points to see if they provided any benefits. “This meant the soil was allowed to dry out more than usual. We also looked at different irrigation targets – varying the soil moisture content we aim to achieve through irrigation. “We looked specifically at targets that left quite a bit of capacity in the soil to store rainfall should it occur shortly after the irrigation finished.

We found that filling it up to 80% of the plant available water capacity and leaving 20% for rainfall was probably the best target level from the point of view of reducing the nitrate leaching substantially while avoiding pasture production losses.” Bright says he was pleasantly surprised by the results. “Before we started the project we didn’t know what the impact would be on pasture production, but this was not compromised. “We were even more surprised by the consequences of changing the trigger level. We found we could use a much lower soil moisture trigger value in spring and in autumn without having any significant effects on pasture production. “This was critical as it allowed the soil to dry out more by delaying irrigation and increased its capacity to store rainfall.” The research team also deliberately tested target levels that did cause a reduction in pasture production to gauge the limits for irrigation triggers and targets.

Centre pivots and solid set sprinkler systems were found to be the most suitable irrigation methods. “About 72% of the irrigated area in Canterbury uses methods that could easily implement these irrigation rules,” Bright says. “The balance of the area would require a range of capital investments to modify them or to replace them to be able to implement these irrigation rules.” Other benefits besides reducing nitrogen loss to water include reducing irrigation water use through improved efficiency and making more effective use of rainfall when it occurs.

This article is by Fertiliser Association of New Zealand and appears on page 36 of the August 2021 edition of the CanterburyFarming publication.

Please click this link for the original article https://issuu.com/canterburyfarming5/docs/edition_2021-08_v4/36